Archiving "on my mac" mailboxes in folders

I have a lot of emails in Mac Mail that were originally Eudora emails, converted to Mac format and now they are in nested folders in the “On my Mac” sidebar of Mail. I want to put all of those emails in a new library, and either I’ve been doing it wrong, or it hasn’t been working, or I’m stopping it before it’s done. Perhaps this screen shot tells the story? In Mail I selected the Older Ins and older Outs folders, then pressed F-1 to capture it to a new library. Pretty quickly it reached the state shown in the screen shot, 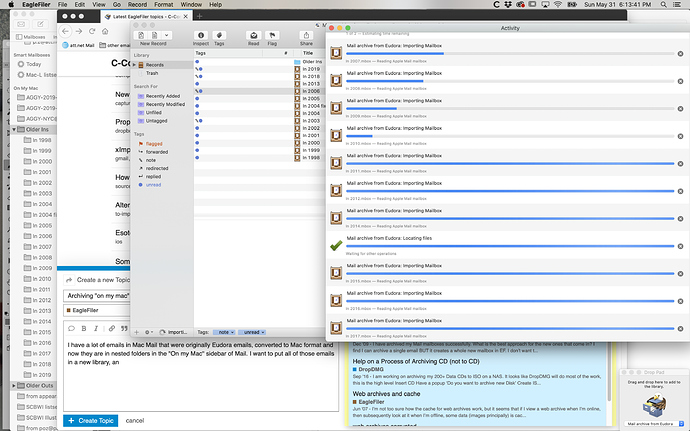 Screen Shot 2020-05-31 at 6.13.41 PM3360×2100 1.12 MB
and Eaglefiler’s Activity window hasn’t advanced at all in over an hour. When I look in Finder at the new library, the individual mailboxes that have shown up in it (about half of the mailboxes in the “Older Ins” folder are there) are small files like 24 MB, and nothing like the big collections of emails that they are. An “importing files” wheel at the bottom of the Eaglefiler window is still spinning, but there is no sign of anything happening.

If I didn’t have enough space in my computer to hold all of this, would Eaglefiler tell me? I’m going to have to sleep the computer for the night, and see what it looks like tomorrow.

If you are trying to import the complete mailboxes (and their submailboxes), it’s important not to select any messages in Mail. Otherwise, EagleFiler will only import the messages that you had selected. That may be why the ones that completed are smaller than you expected.

I don’t see anything obviously wrong in the screenshot, except that you say it got stuck without the progress advancing. If that’s still the case, please use Activity Monitor to record a sample.

If you run out of disk space, EagleFiler will report that as an error and abort the import.

When I woke my computer up in the morning it was just like the evening before, still with the spinning spokes on the lower left corner of the EagleFiler window saying “Importing Files,” and it showed no more progress as time went on. I forget the reason it gave for refusing to quit but I Force-quit, deleted the new library and tried again.

And now it’s the same exact thing, though the progress bars aren’t in the same places. I can’t sample in Activity Monitor because Sample Process is grayed out. In Activity Monitor’s list EagleFiler is using 0% of CPU and shows up red, not responding. EagleFiler doesn’t come to the front when selected in the Dock, but it does if I can find one of its windows to click. Even then, it has the spinning beach ball and won’t do anything I ask it to, including cancel any of the activities in the Activity window. Could it be doing its thing and I’m trying to make it do too much too soon?

I rebuilt all of the mailboxes before redoing it today, thinking there may have been some trouble there. So now there shouldn’t be that. Maybe it’s significant that one of the nine mailboxes that did show up in the EagleFiler window (out of a total of 42 that were in the two folders I selected) has a little pencil icon next to the blue dot. Yesterday several had that pencil.

I wanted to edit the above post but was too late. One thing I see that I hadn’t noticed yesterday is that in the Activities window, where the top two items are import-folder icons, the second one representing the one folder some of whose mailboxes showed up in the Records window, under that second icon it says “89,403 of 102,528” and “About 10 seconds.” And that isn’t changing. And I’m thinking that the progress bars may actually have stopped in the same places for the same mailboxes as yesterday. So I’m wondering if there might be one or more messages with corruption that is stopping EagleFiler. (It didn’t stop Mail from working, though).

I can’t sample in Activity Monitor because Sample Process is grayed out.

You need to select EagleFiler in the list before you can Sample Process.

In Activity Monitor’s list EagleFiler is using 0% of CPU and shows up red, not responding.

I’ve seen a few users run into a threading deadlock that can cause that. It may help (after you restart EagleFiler) to click this link to reduce the number of threads that EagleFiler uses when importing.

Could it be doing its thing and I’m trying to make it do too much too soon?

No, if it’s doing it’s thing the app would be responding.

Maybe it’s significant that one of the nine mailboxes that did show up in the EagleFiler window (out of a total of 42 that were in the two folders I selected) has a little pencil icon next to the blue dot. Yesterday several had that pencil.

That icon means there’s a note, which you can view in the Info window. Typically, EagleFiler will add a note during import to let you know of any duplicates that it removed.

And I’m thinking that the progress bars may actually have stopped in the same places for the same mailboxes as yesterday. So I’m wondering if there might be one or more messages with corruption that is stopping EagleFiler.

It is possible that a damaged file could cause the app to hang if the file system gets stuck reading it. A sample would let us see whether that’s what’s happening here.

For unknown reasons, it now works! Before acting on of your advice, I thought I’d look again at what I had gotten when I force-quit, and it was actually quite a lot of stuff, though less than a third of what I’d tried to capture, and this time I could open the mailboxes and see mail! So I thought I’d try adding a relatively small amount to what was already there, and I “captured” one more mailbox that should have downloaded before, and it worked quickly. Then in increments I captured everything else that was missing, and watched EF rebuild and index the mailboxes. And now I have what seem to be full versions of all the mailboxes I want in there, even ones whose import looked stalled at an early stage in the Activities window of the screen shot I posted here, and which I did not re-import! So thanks, I think I’m set!

Great, thanks for the follow-up. Yes, if an import of a certain mailbox doesn’t complete, EagleFiler will not show it (or store it) at all. So anything that you see should be a complete import. If you import the exact same mailbox that had already finished importing, it will see it as a duplicate and skip it.