Double the file size due to the 'Files' section

I have around 50 GB of email (*.mbox) files I’d like to import. I’ve imported a few of them to test out the trial of EagleFiler and everything seems to work, however I’ve noticed that the disk space taken up by my Library is close to double the size of the mbox I import. I’ve realized this is cause the mbox is stored in both the .eflibrary file and in the ‘Files’ folder. I have read the manual and understand this is so I can have local access, outside of EagleFiler, so these files. However, I don’t need that, plus I have the original mbox files backed up elsewhere. I also can’t afford to use up 100 GB of disk space for this purpose.

The instruction manual says to not mess with the names of things inside the ‘Files’ folder, so I’m not sure what I should do. Is there a suggested method to deal with this situation?

I’ve noticed that the disk space taken up by my Library is close to double the size of the mbox I import. I’ve realized this is cause the mbox is stored in both the .eflibrary file and in the ‘Files’ folder.

No, that’s not correct. The mbox is only stored in the Files folder. The .eflibrary contains .efmailtoc and .efindex files for the mbox. These are indexes of the mbox to enable faster display and searching in EagleFiler. Normally, these are smaller than the mbox itself, although it depends on how much of your mail is text vs. non-text attachments. You can reduce the size of the index by using word indexing instead of phrase indexing.

Second, if you don’t want to duplicate the mbox files that you already have, you could just move them into the EagleFiler library instead of having EagleFiler copy them.

I have some further details of the issue I’ve experienced. My *.mbox files are not in Mail, they are quite large and Mail just gives me issues with them all the time, hence hunting around for another solution. When I import them into EagleFiler, what seems to happen, is that during the import process itself the eflibrary file grows to be significantly larger than the size of the mbox file being imported. Then after the import is complete the eflibrary file and the ‘Files’ folder is about the same size, and then after EagleFiler is quit and relaunched the eflibrary file is significantly smaller again. I have attached several screen shots to show this. In the first one I am importing around 12gb of *.mbox files and the eflibrary file is ~3GB. It then grows to 18GB while the ‘Files’ folder is ~6.5GB. After the import is complete both are ~9.5GB (again, I had 12gb of *.mbox, not sure how 4gb disappeared but as far as I can tell everything is there). After relaunching Eaglefiler the ‘Files’ is still ~9.5GB, but the library file is only 250 meg.

My issue before was that I was importing 50 GB at once and I didn’t have 100GB of space free during the import process, but by doing it in pieces I’ve gotten everything imported fine. 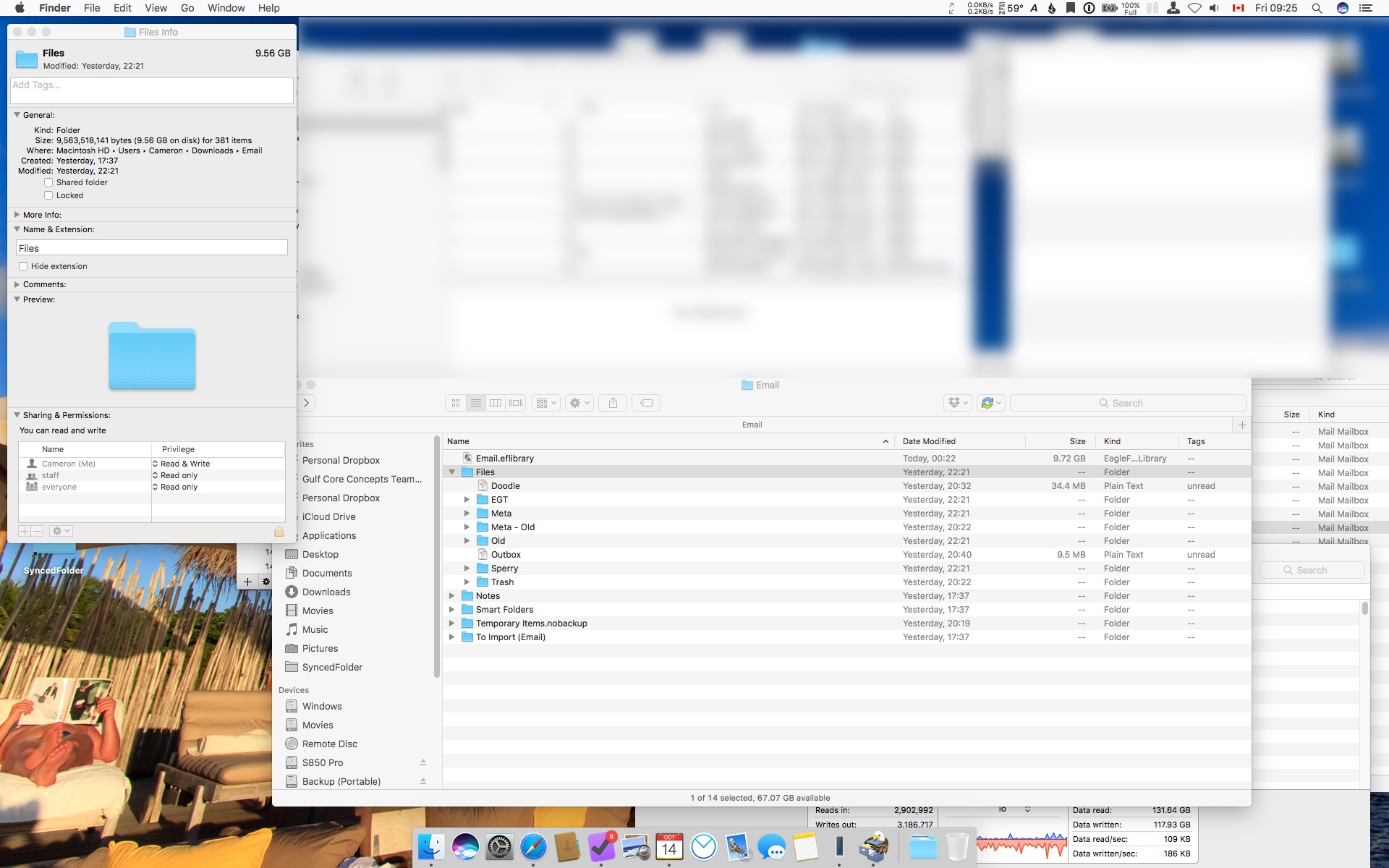 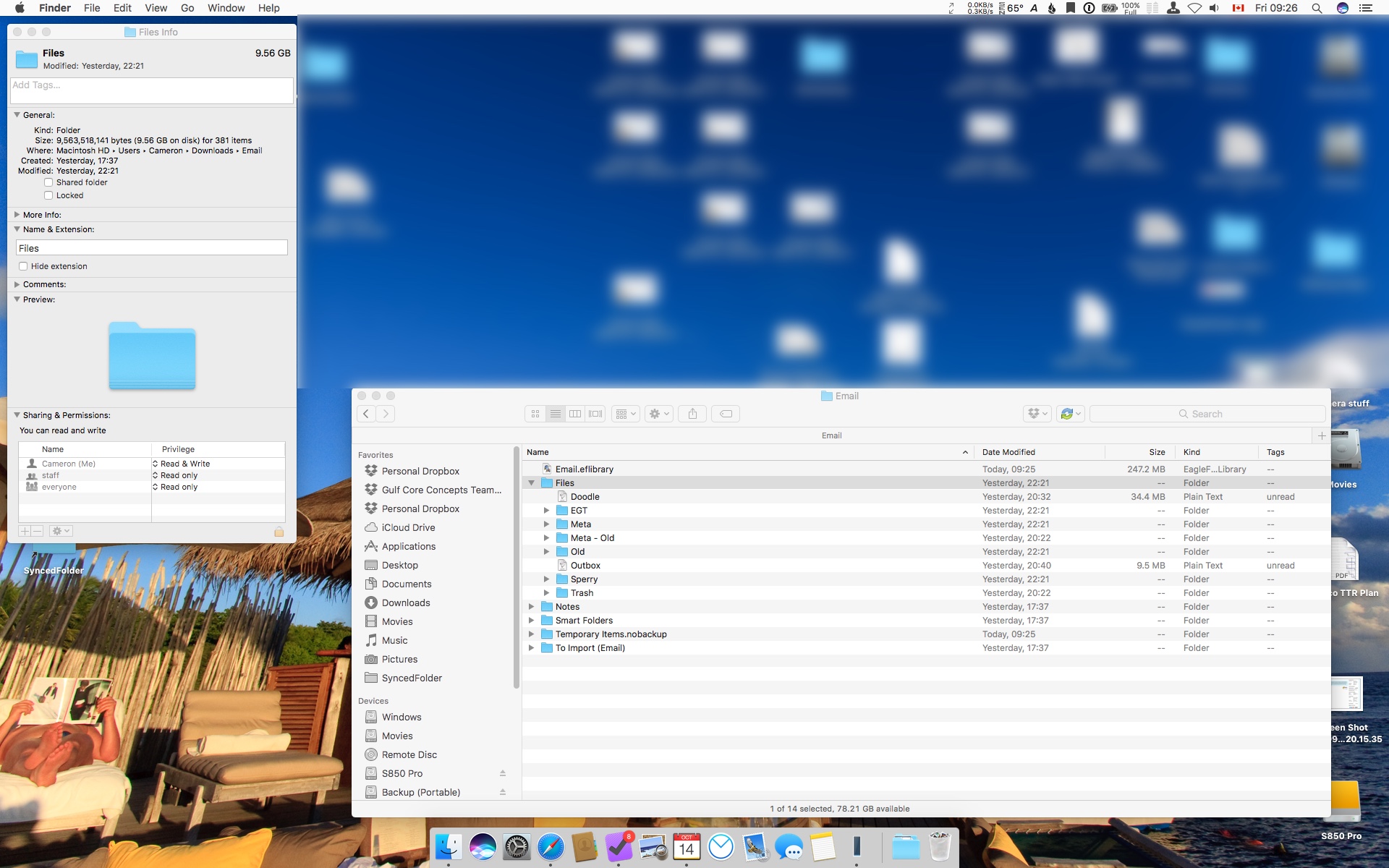 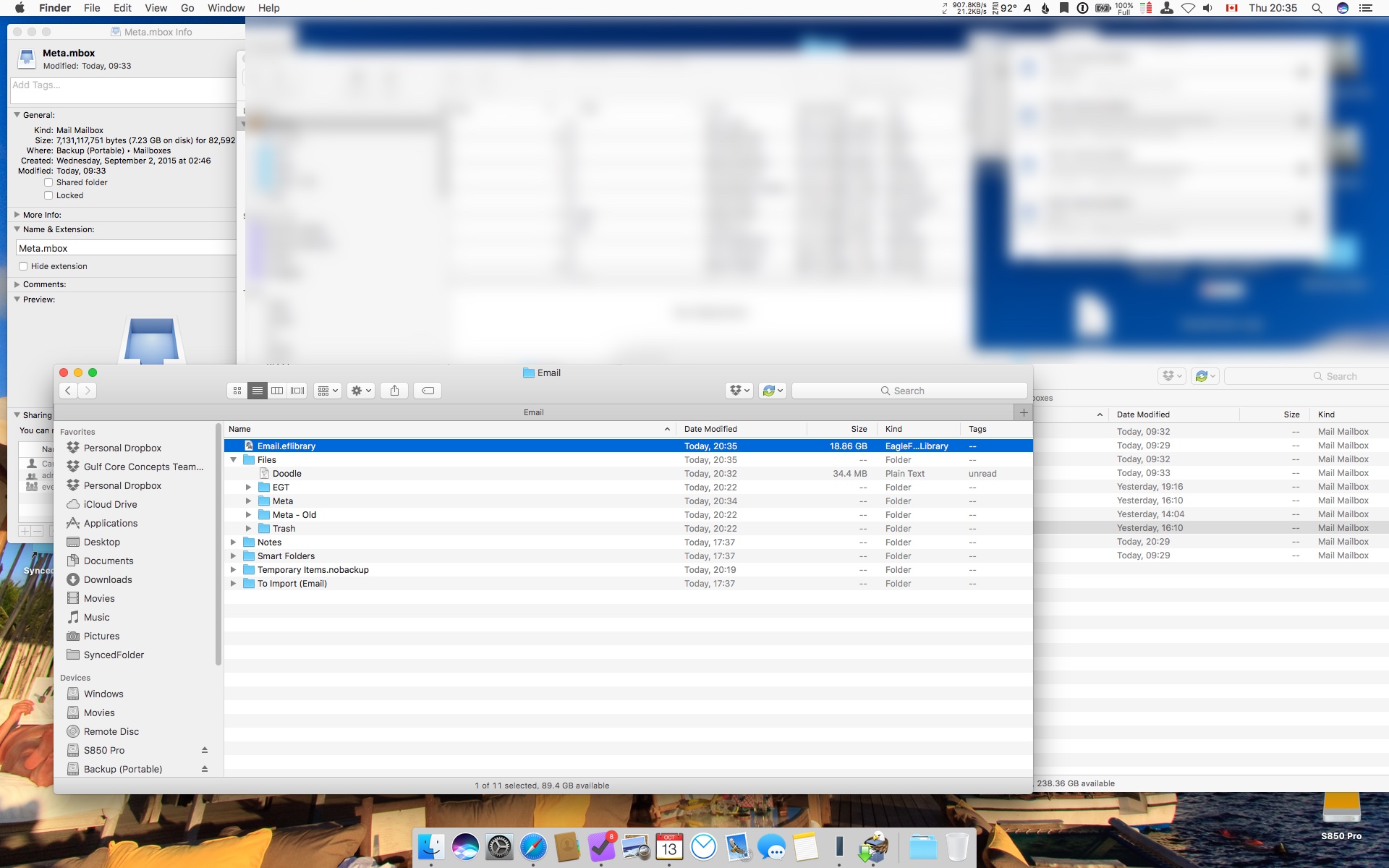 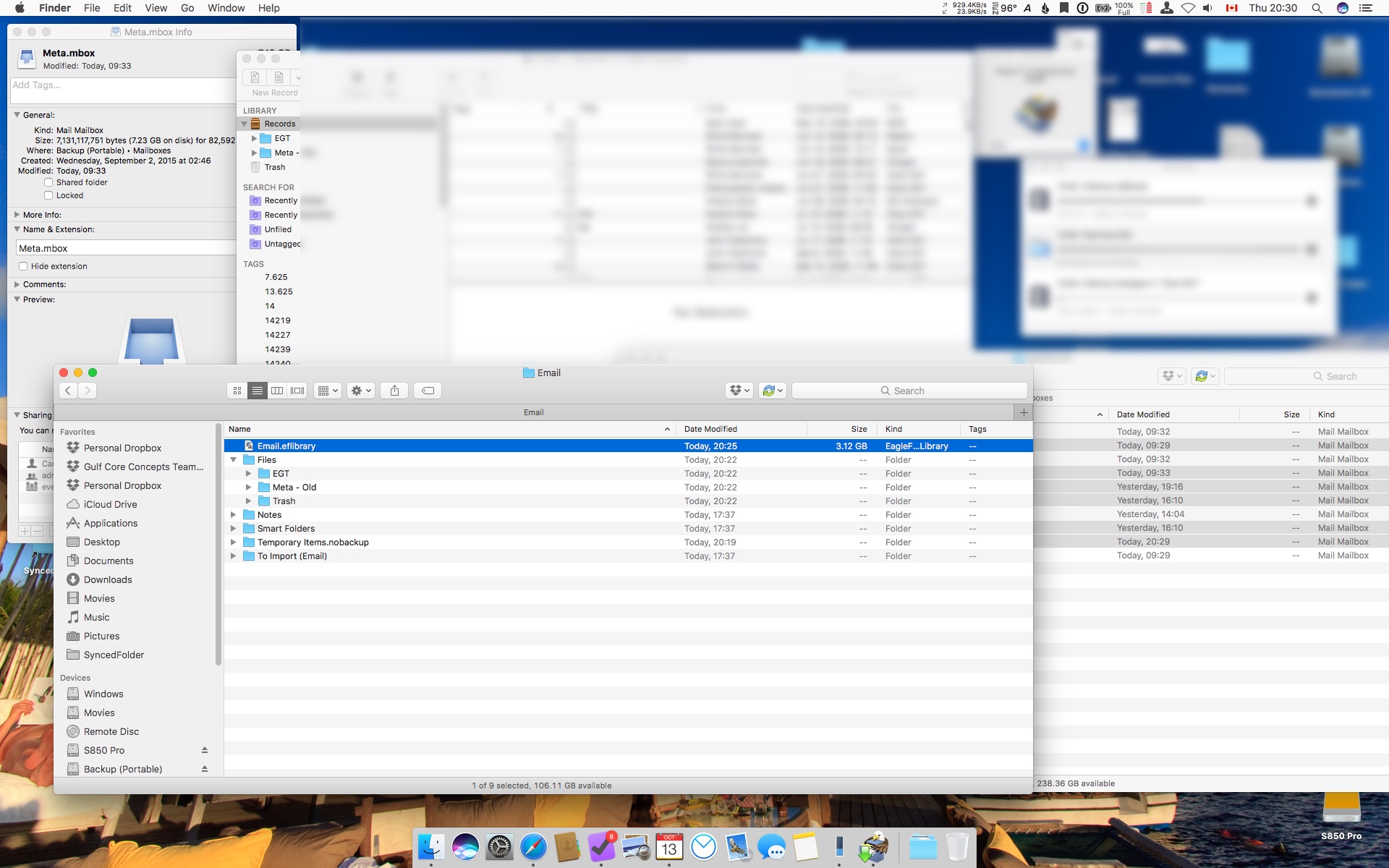 My comments were based on the fact that you said you were importing “.mbox” files, which I took to mean as files in mbox format. It sounds like you are instead importing “.mbox” folders that were created by Apple Mail. This is a completely different format, which should not be imported by moving, as I suggested above. When importing a folder from Apple Mail, EagleFiler creates a lot of temporary files inside the .eflibrary. If you look inside the package you can see how much space is used by the temporary items folder vs. the indexes folder. Most of the temporary items should get cleaned up when the import finishes, and the rest when you close the library or relaunch.

Apple Mail’s folders store duplicate copies of attachments, as well as extra metadata for Mail, so it’s normal for the final mbox files that EagleFiler creates to be smaller than what you started with.

Importing in batches does sound like the best solution for your situation.