I installed EagleFiler for my client about a year ago and archived a bunch of her email to it. Neither of us has touched it since then—until earlier this week when I wondered whether any email she thought she lost was actually there.

I opened the app to find the library file corrupt and followed the instructions to rebuild it. However, the app got stuck during reindexing and the time remaining ballooned over the course of the day from 3 minutes to 5 hours and never actually finished.

Should we try again? What other troubleshooting do you recommend to recover her library?

There’s no need to rebuild the library again, since indexing problems don’t indicate anything wrong with the database/library itself.

Indexing only affects Anywhere and Notes searches, so she should still be able to browse the e-mails and do other types of searches while it’s still reindexing.

In order to do indexed searches, she could rebuild the indexes. Or, if that gets stuck again, she could enable logging to determine where/why it’s getting stuck.

Thanks, Michael, for your detailed and speedy response, which gives me more awareness of the vocabulary of your app. Your thorough documentation is immensely helpful! I think she was still having trouble seeing all the records, but I’ll next help her rebuild the indexes and see if that helps. I’ll send a log if it comes to that.

I completed a reindex today and it did not get stuck. However, there’s still a breakdown somewhere. The mailbox of concern is called INBOX and in the associated EagleFiler folder in the Finder, the file is over 600MB.

In the app (see screenshot), INBOX contains 2,917 messages, but nothing I do will reveal these messages. How do I get EagleFiler to show them? Do they need to be converted from the text file to emlx files? What am I missing? 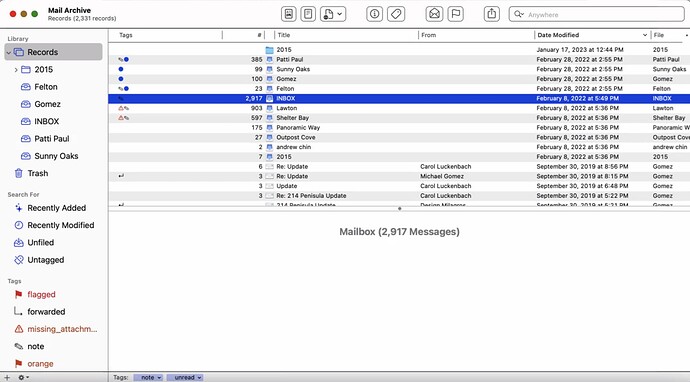 In the app (see screenshot), INBOX contains 2,917 messages, but nothing I do will reveal these messages. How do I get EagleFiler to show them?

You can either double-click the INBOX that you already have selected in the above screenshot, or click on INBOX in the sidebar at the left of the window.

Yes, I tried both and am shown an empty list.

Could you include a screenshot of that? 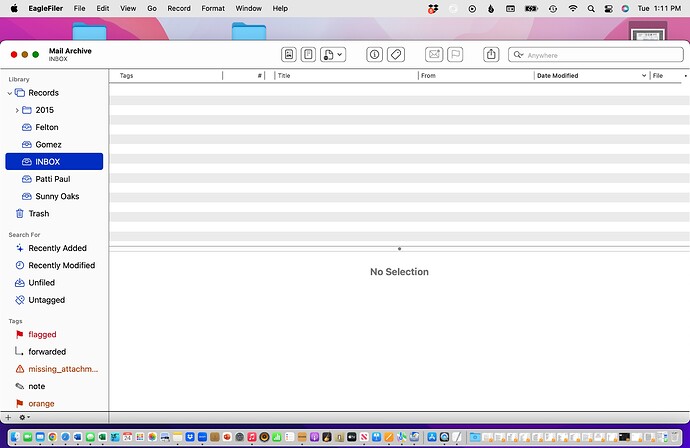 Well, I don’t think I’ve ever seen that before. Your other mailboxes display correctly? What happens if you create a new library and import the INBOX file into it?

One possibility is that you had moved all the messages out of the mailbox by dragging them into a folder (which converts them to .eml files). That would mark them as deleted in the mailbox, so they would be hidden unless you have Show ‣ Deleted Messages checked.